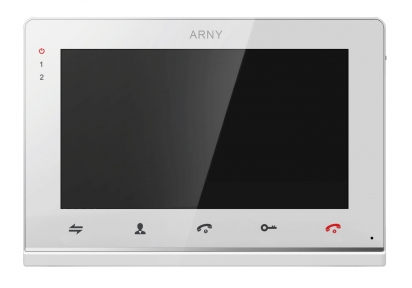 ARNY AVD-710MD video doorphone –is a modern device with an excellent set of functions that allows the user to exercise not only access control, but also video surveillance with the possibility of record. This provides the user with additional security.

The minimum set of the connected video door phone consists of the ARNY AVD-710MD monitor and, for example, ARNY AVP-NG210 call panel, orARNY AVP-NG110 call panel . A feature of the offered model is the possibility to create a multi-user system, which includes up to 4 monitors and 2 call panels. In this case, there is a main doorphone, and the rest are used as subordinates. It is the central device that call panels, additional video cameras, alarm sensors and a monitor can be connected to.

Such a system allows the user to divert calls between monitors, talk and open doors to visitors from different rooms, use the doorphone as an intercom.

When the panel receives a call, a guest image appears on the monitor screen. A photo is automatically taken and stored in the built-in memory. The photo can be taken manually during a call at any time. If the video recording function«is installed in the setup menu», then the video will be recorded on the SD card (SD card must be installed in the doorphone).

In addition, images from cameras can be viewed and recorded in monitoring mode. Successive pressure«of the View button» display the shots from all connected video devices, and the record is done manually. If there are alarm sensors in the system, video recording from additional cameras can occur when these cameras are triggered.

Adjustment of recording modes and other ARNY AVD-710MD parameters is made through the graphical menu in Russian with the help of side buttons.

When connecting internal CCTV cameras with the current consumption of more than 200 mA or external cameras, an external power supply unit must be used.

Specifications
Screen size, in.
7
Color
white, black
Communication method
hands free
Set
w/o panel
Built-in memory
yes
Color system
NTSC, PAL
Supply voltage, V
100–240
Customer Reviews
Be the first to review this item. Share your rating and review so that other customers can decide if this is the right item for them.
You have to log in to leave a comment. Sign in
Accessories
Reviews: 0
ARNY AVP-NG320
Brand: ARNY
Number: 19122
79€
63€
Not available
Notify when available
Add to Wishlist
Add to compare Open in compare list